Grandpa & Dad outside their home in Clarion in the 1940s. At this time, Grandpa Ed had an oil and gas well drilling business in Clarion. He learned the oil well trade from his father Henry Hess, and Grandpa started working with his own father when he was 15 years old. 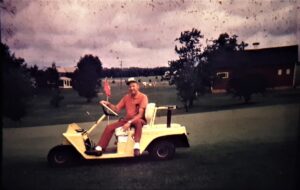 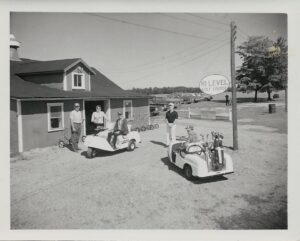 Dad and Grandpa with the Gilmores, who had a trailer business in Seneca in the 1960s. The Gilmores were some of our first golfers. 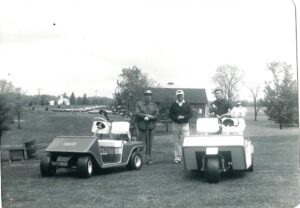 Dad on the right, golfing with his friends on 4 green in the 1970s. 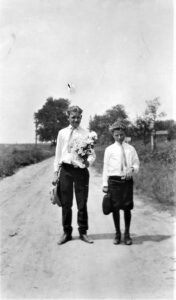 In the 1920s on Stonehouse Road; to their left would be today’s 3 tee.
Grandpa Ed with younger brother Harry, who would grow up to be an oil engineer and then photographer. We are grateful for Uncle Harry: many of the slides and photos we have of the building of HI-Level Golf Course were taken by Harry.

Grandpa with one of his horses. After he’d finished working in the drilling trade, he created a dude ranch and let people come and ride horses around what is now the front 9 at Hi-Level. This may be the bottle-fed colt that was featured in many newspaper articles in the late 1950s. 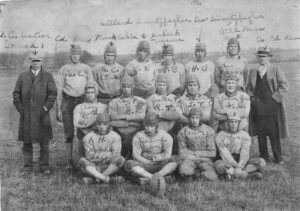 Dad congratulates our mailman, Ed Ziegler. Dad became PGA certified to give golf lessons to many new golfers who learned the game at Hi-Level.